Machias -Down East Community Hospital held a beam signing ceremony on Wednesday, January 18, just before the last steel beam was put into place at the Emergency Department construction site.  Karl Ward, President/C.E.O. of Nickerson & O’Day, Inc., as well as Hospital CEO, Dennis Welsh, and Board Chair, David Whitney, spoke about the features of the project and the tradition of the beam raising ceremony. After the ceremony, people lined up to sign the beam and then waited until the beam, adorned with the U.S. flag, the state flag, and a tree, was hoisted to the top of the structure and put into place.   Many people who had donated funds to the project were present to sign the beam including some members of the Machias Rotary which had donated $2,500 to the Emergency Department Expansion Project. 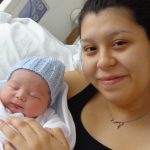 DECH Welcomes the First Baby of the New Year

DECH Lights Up The Machias Bridge

Down East Community Hospital’s Annual Flu Shot Clinic Comes to an End, For a Positive Reason

This site uses Akismet to reduce spam. Learn how your comment data is processed.